What is Suffragette Jewellery? 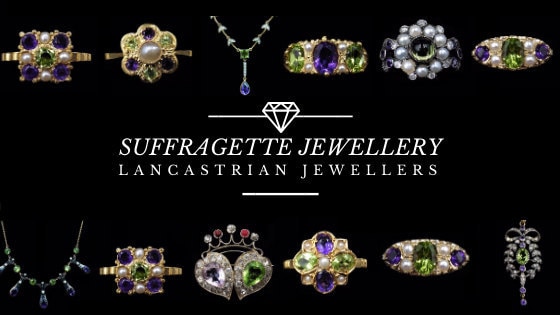 The popularity of Suffragette jewellery has exploded over recent years after the release of the film ‘Suffragette’, marking the 100-year anniversary of women getting the vote. When I first heard about Suffragette jewellery, I was of the belief that all jewellery from the early 20th century featuring the Green, Purple and White colours were related to the movement. But oh, how I was wrong...

What is a Suffragette?

As the 19th century drew to an end, women began actively seeking better rights, in particular the right to vote and to have their voices heard in government. The Suffragettes were a group of women campaigning for the right to vote.

Emmeline Pankhurst led the Women’s social and Political Union which was formed in 1903. This group actively fought and campaigned for the Vote, leading protests and marches as well as more direct approaches such as heckling politicians and hunger strikes. 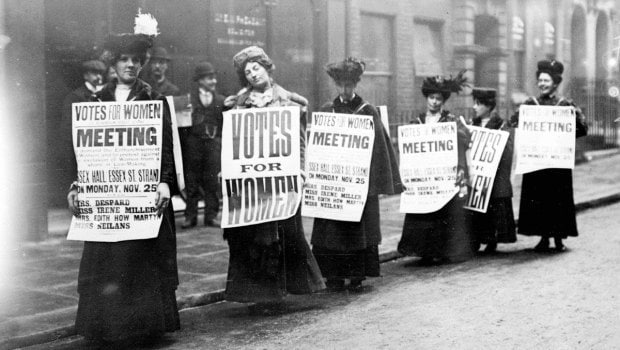 Many women proudly wore jewellery as a way of showcasing their involvement in the movement and it became instantly recognisable by the colours of Purple, White and Green.

This colour scheme, devised in 1908 by Mrs Pethick-Lawrence, was to be worn as a “duty and a privilege”. Suffragettes wore purple for loyalty and dignity, white for purity, and green for hope.

Lawrence said: “Purple… is the royal colour… It stands for the royal blood that flows in the veins of every suffragette, the instinct of freedom and dignity… White stands for purity in private and public life… Green is the colour of hope and the emblem of spring.” 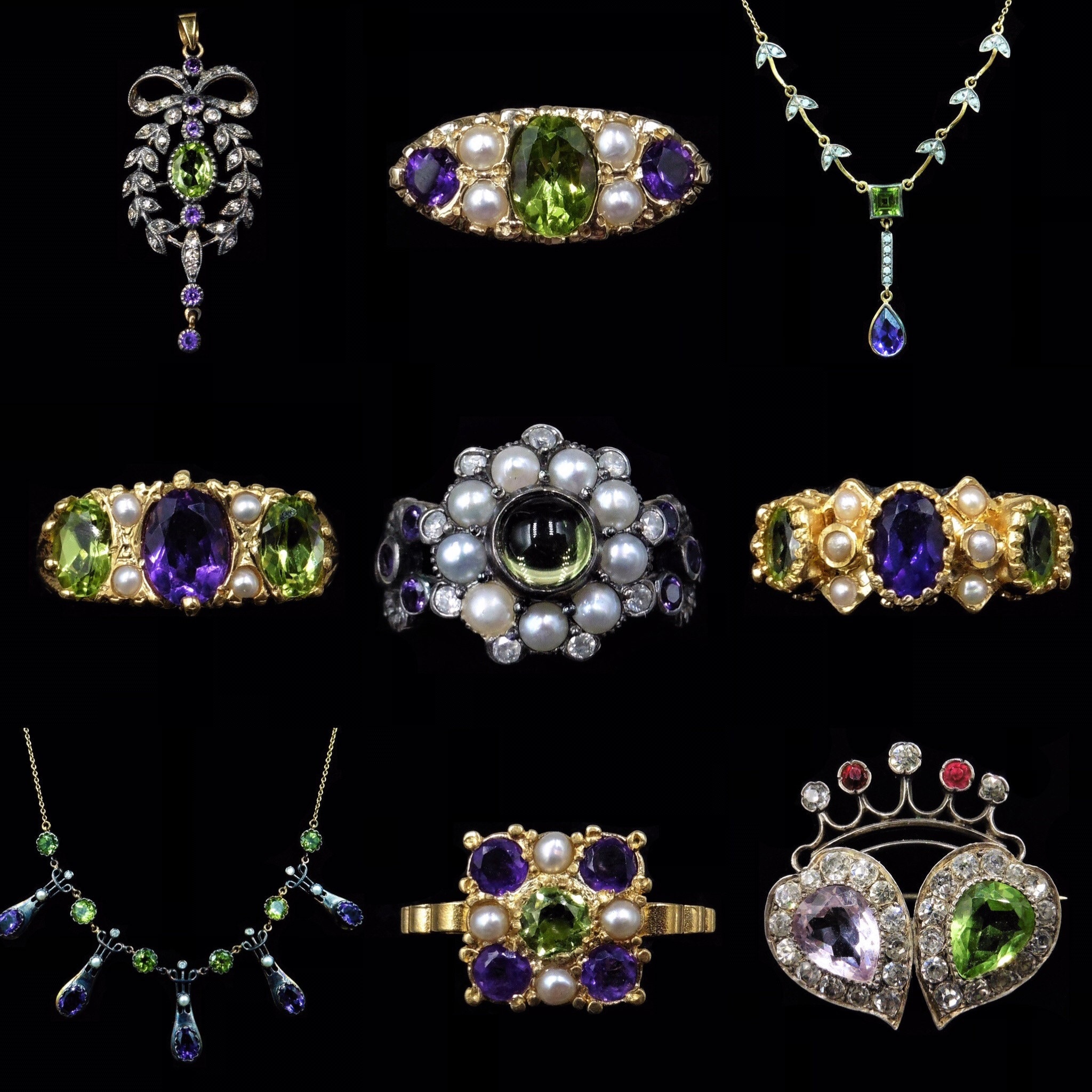 However, a common misconception is that all Green, White and Purple jewellery from the early 20th century belonged to a Suffragette. Along with the idea that the acronym for the colour scheme was Give (Green), Women (White), the Vote (Violet). Some historians argue that this was just a popular colour scheme of the period and therefore, not every piece of jewellery that features Amethyst, Peridot and Pearl directly links to the political movement.

But that’s not to say there was never any high-end jewellery produced in the purple/green white/ colours with a direct connection to the movement, because there absolutely was.

A supporter of the WSPU, Stanley Mappin, owner of Mappin & Webb, printed a catalogue of suffragette jewellery for Christmas 1908. It included brooches and pendants set in gold with emeralds, pearls, and amethysts.

There is another piece of jewellery legitimately associated with the Suffragette Movement and that’s the Holloway Brooch. This was designed by Emmeline Pankhurst’s daughter, Sylvia, and featured the portcullis symbol of the House of Commons. These were all meant to honour the suffragists who served sentences in Holloway prison. These pins are rare and arguably the one of the most authentic examples of what is termed Suffragette jewellery. 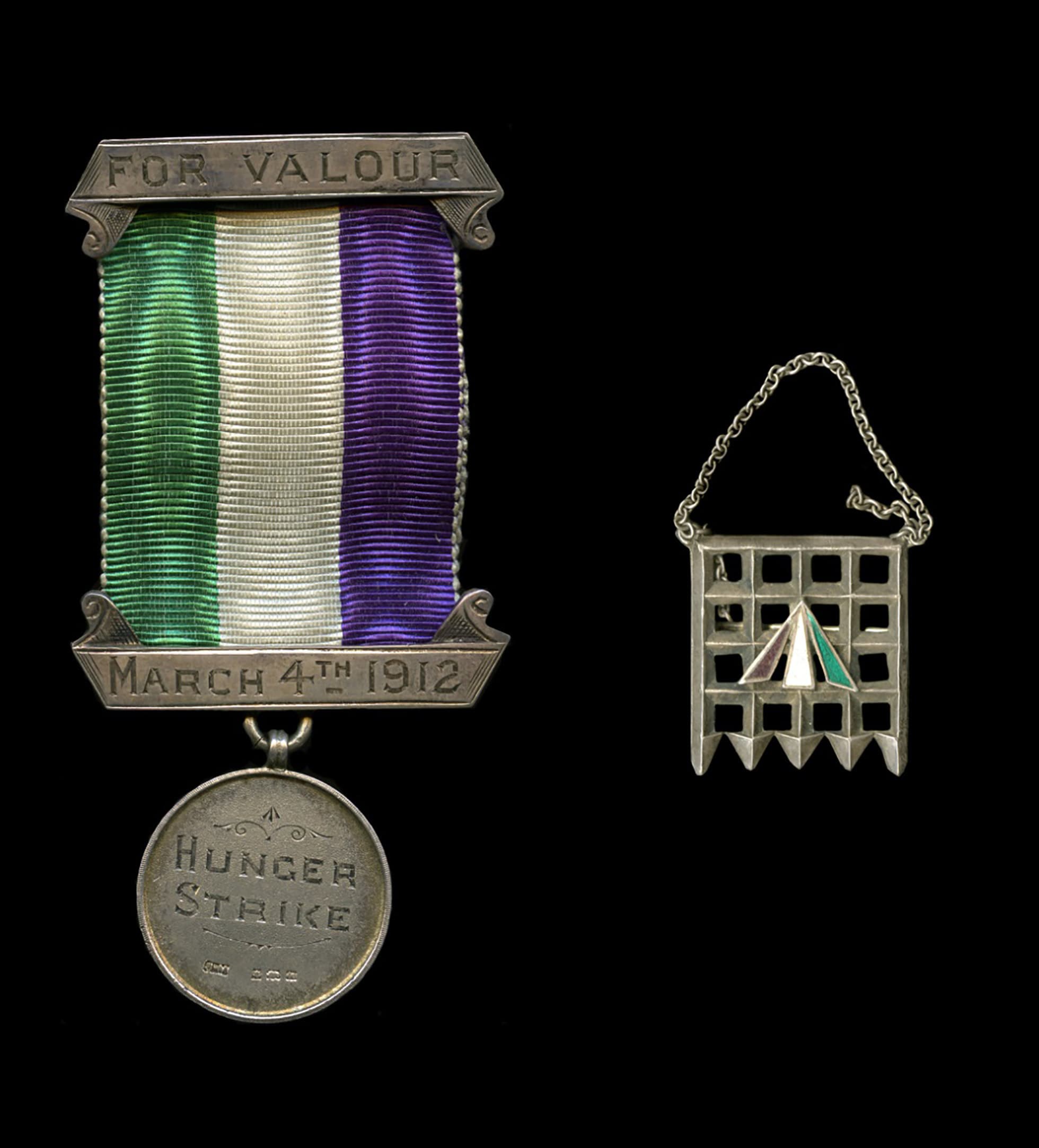 At Lancastrian Jewellers, we stock a range of Suffragette and ‘Suffragette style’ pieces which feature the gemstones and colours of the movement, in both antique and antique style examples.

You can shop this collection here. 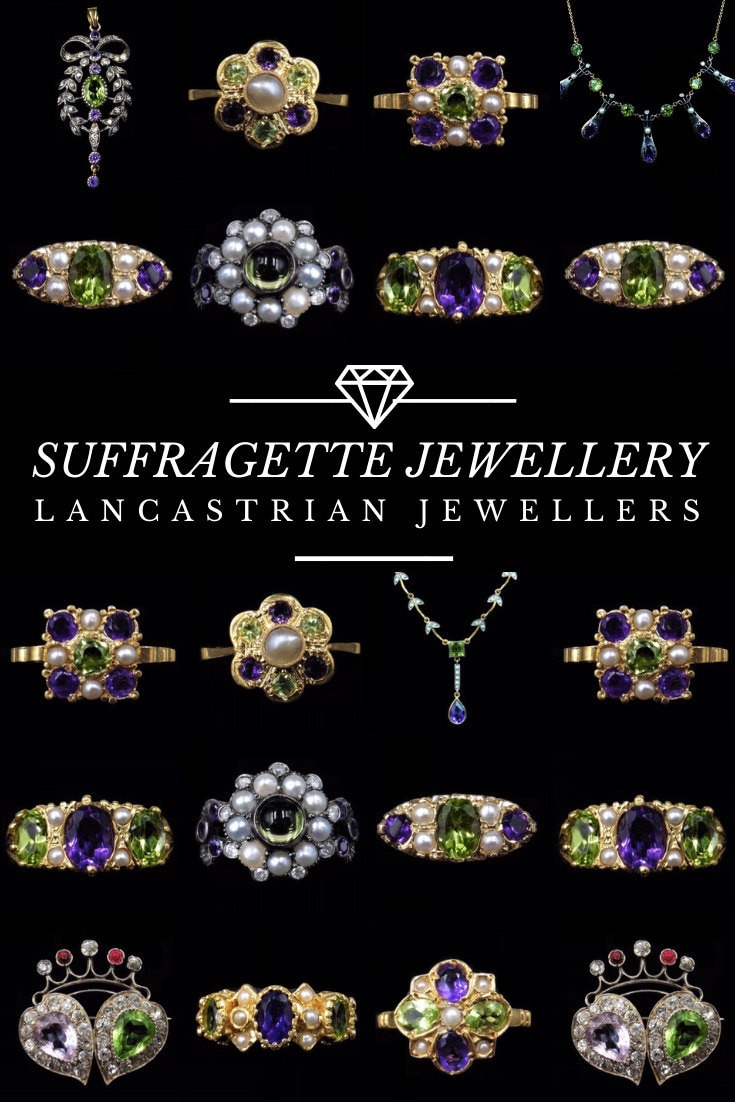 To my US readers: Our ancestors fought for the right to have our voices heard, the least we can do is exercise that hard- earned privilege and go and vote on the 6th November. Do it for the suffragettes.

Previous Post What is Antique Paste Jewellery?
Next Post Victorian Symbolism in Jewellery
0 items in your cart