The Ultimate Guide to Victorian Jewellery 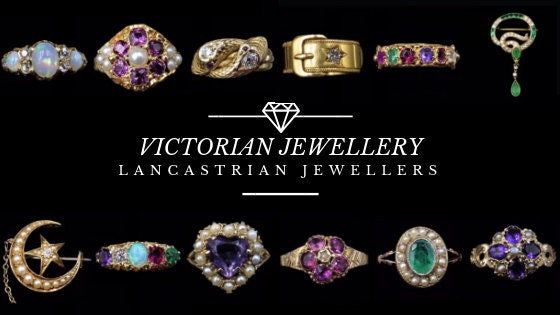 The Victorian era, named after the reign of Queen Victoria, spanned from 1837 to 1901. She ascended the throne at age 18 and in 1840, married Prince Albert.

Because of its length, the Victorian era is typically broken up into three periods. The Romantic period, circa 1837–60; the Grand period, marked by the death of the Queen’s husband, circa 1860–80; and the late Victorian or Aesthetic period, 1880-1901, which ushered in the Belle Epoque.

In terms of jewellery, each of these periods had its specific gems, motifs, metals and fabrication techniques that rose and fell in popularity. Jewellery was very important during the era as the jewellery you wore not only reflected your wealth, but also social standing and status. 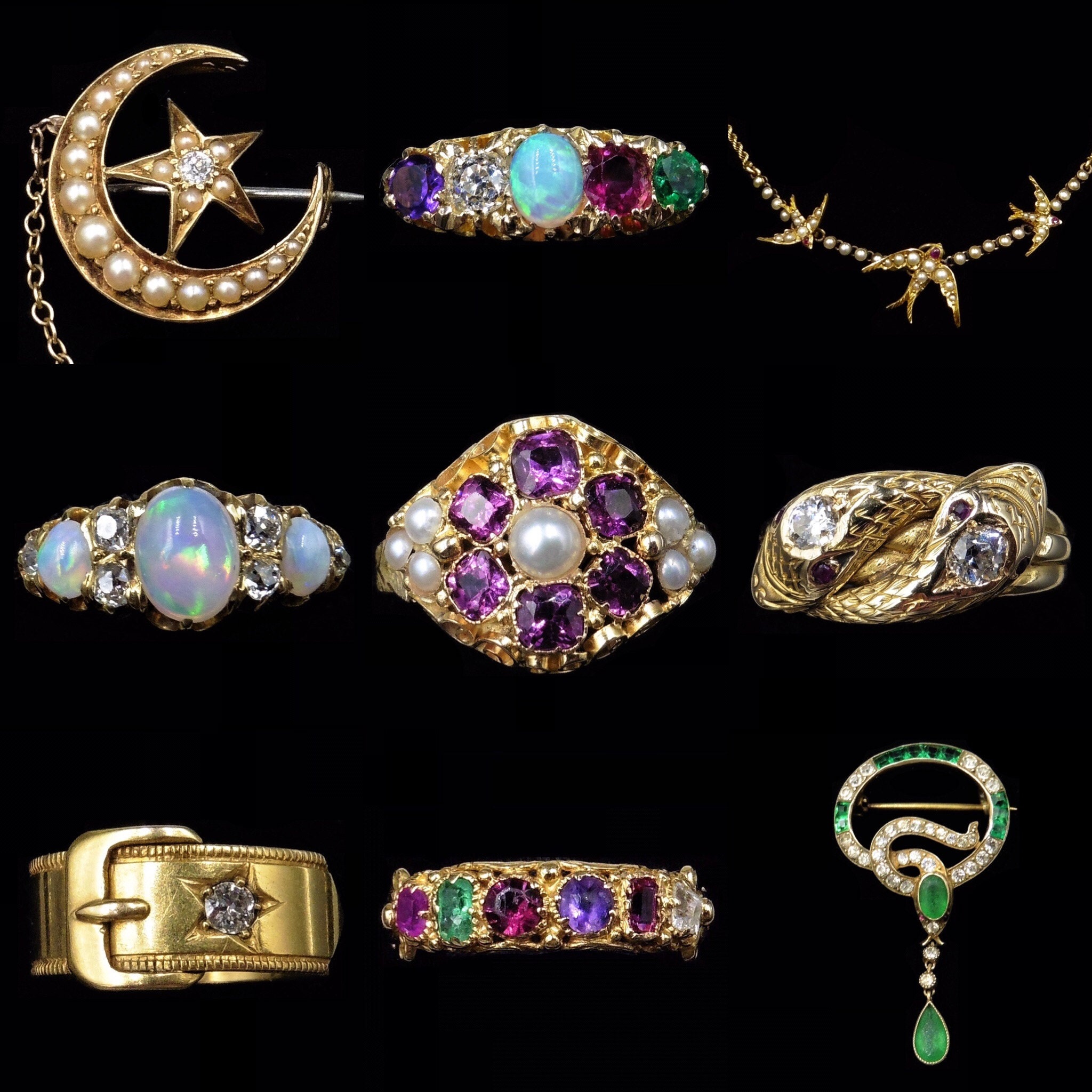 The Romantic period was a celebration of the new young Queen and her love for her husband. When Prince Albert became engaged to Queen Victoria, he gave her a serpent ring set with Emerald eyes, her birthstone. The serpent, symbolised eternity, and has been a popular motif in jewellery ever since.

Jewellery from this period tends to be feminine and ornate. Flowers, hearts, birds, and bows were just some of the common decorative motifs. These pieces were embellished with seed pearls, coral and turquoise.

Acrostic jewellery with hidden love messages such as ‘DEAREST’ or ‘REGARD’ became increasingly popular following their debut in the Georgian era.

Lockets enclosed with hair, cameos depicting cupid or a loved one’s face and enamel pieces were also popular. It was very much the ‘honey-moon period’ of the era with happy and new beginnings all round.

During this time the Industrial Revaluation was also surging ahead. Jewellery was no longer only made by hand and it was becoming more affordable for the ever-growing middle class. This was reflected by jewellery now being layered and stacked like never before. However, due to a Gold shortage in Britain, lower-carat Gold and Gold plating were common.

1861 marked the death of Prince Albert and the beginning of the Grand period. The Queen, heartbroken and stricken with grief, went into a state of mourning. Her fashion and jewellery were hugely influenced by this, everything she wore was black, including her jewellery.

Mourning become an art for the Victorians, who designed black clothes and jewellery to be worn in the months following a relative’s death. Much of the jewellery of this era was made out of jet, a fossilized coal, as well as black onyx. These materials were sometimes adorned with seed pearls, which symbolised tears.

Unlike the Georgian period, which was more focused on the macabre, Victorian mourning jewellery was more romantic, a way to honour the memory of the departed. Jewellery would often contain or be made from human hair, and black enamelling was used to inscribe names and ages of the deceased.

At the same time, travel and exploration to ancient sites inspired a period of “Revivalism,” whereby jewellery imitated Renaissance, Egyptian and Etruscan designs. The expanse of British power and wealth also meant that British jewellery was adorned with an unforeseen breath of gemstones and precious metals – blue sapphires from Montana, diamonds from South Africa, and opals from Australia. Gold was also beginning to become more available however, majority of jewellery was still made in low-carat Gold, Pinchbeck / Gold plating or Silver. 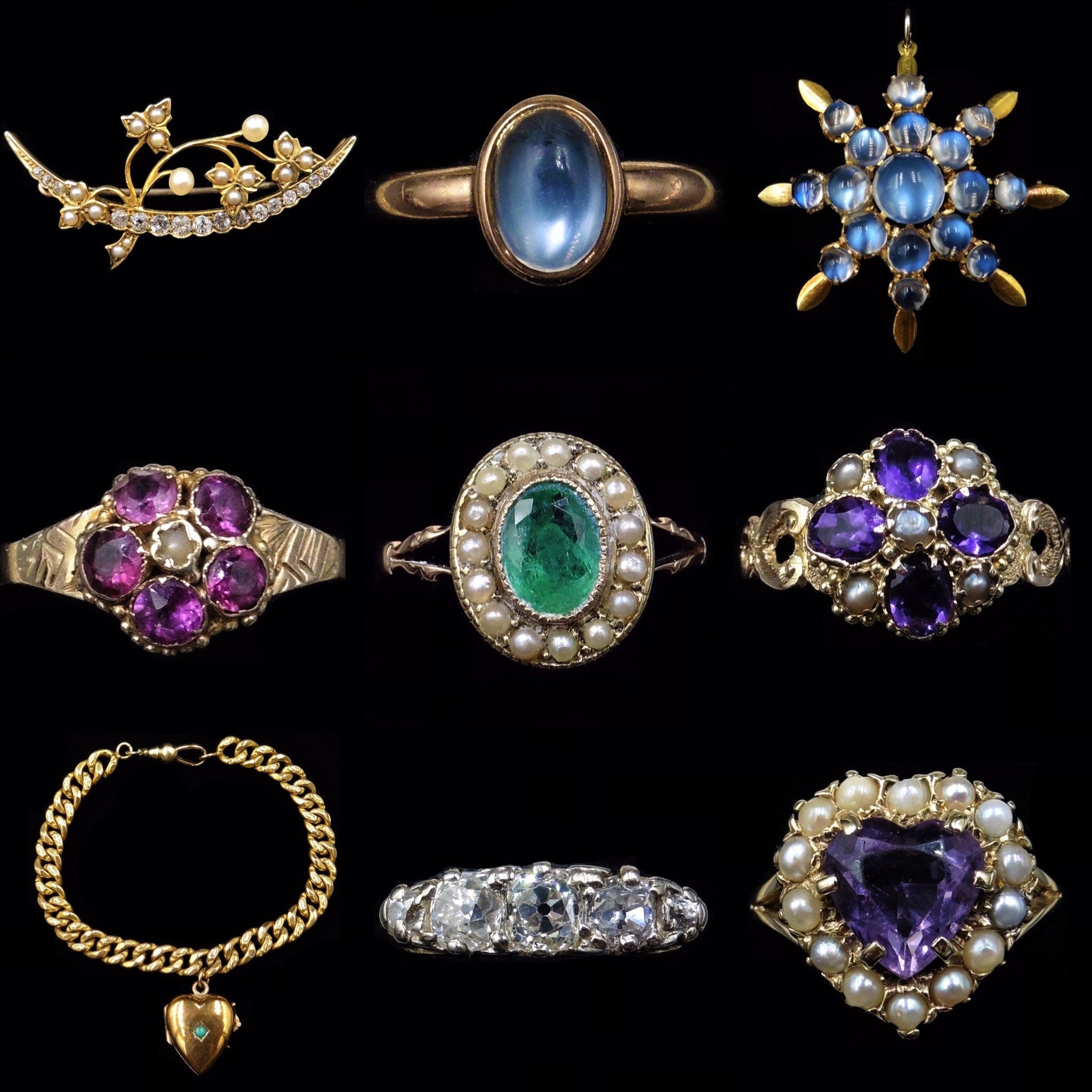 By about 1880, after years of mourning, the Queen and her subjects were ready to look to the future. Late Victorian jewellery reflects this prosperity, with common motifs being jewelled insects, animals, stars, crescents, and flowers. Symbols of good fortune and sentimentality were also popular such as horse shoes, clovers and intertwined hearts.

While the early Victorian era focused on mass-production and manufacturing, this period renewed its appreciation for hand craftsmanship. Jewellery became smaller, lighter and daintier than previous Victorian styles.

This was also influenced by the fact women were now participating in certain sporting events and were beginning to enjoy unprecedented levels of independence. This meant for smaller and more practical jewellery to accommodate for the changing times ahead.

Lockets and heart pendants remained popular, but the REGARD or DEAREST acrostic rings were replaced by Mizpah pieces, which means “the Lord watches over me” in Hebrew. These items were exchanged between two people to symbolize a close bond.

Diamonds came into fashion, following the Queens Diamond Jubilee, and semiprecious gems such as amethysts and opals became prevalent too. Using gemstones for their natural beauty and not their worth was something that jewellers of the Aesthetics movement felt passionate about, and this ideology really become relevant in Art Nouveau jewellery.

The end of the Victorian era coincided with the rise of Belle Époque in France and the beginnings of Art Nouveau and Arts and Crafts Movements.

While seemingly traditional, the jewellery of the Victorian era embraces changes and progress on a wide scale. Shaped by royalty, economic growth, globalization, and the common man, these fashions paved the way for the dramatic upheavals of style and design in the 20th century.

As with Georgian jewellery, not all Victorian jewellery was fully hallmarked due to the Gold Assaying laws not being enforced until the 1900’s. However, there are some signs which will help you distinguish a genuine antique piece from a reproduction.

You can also read all about Symbolism in Victorian jewellery here... 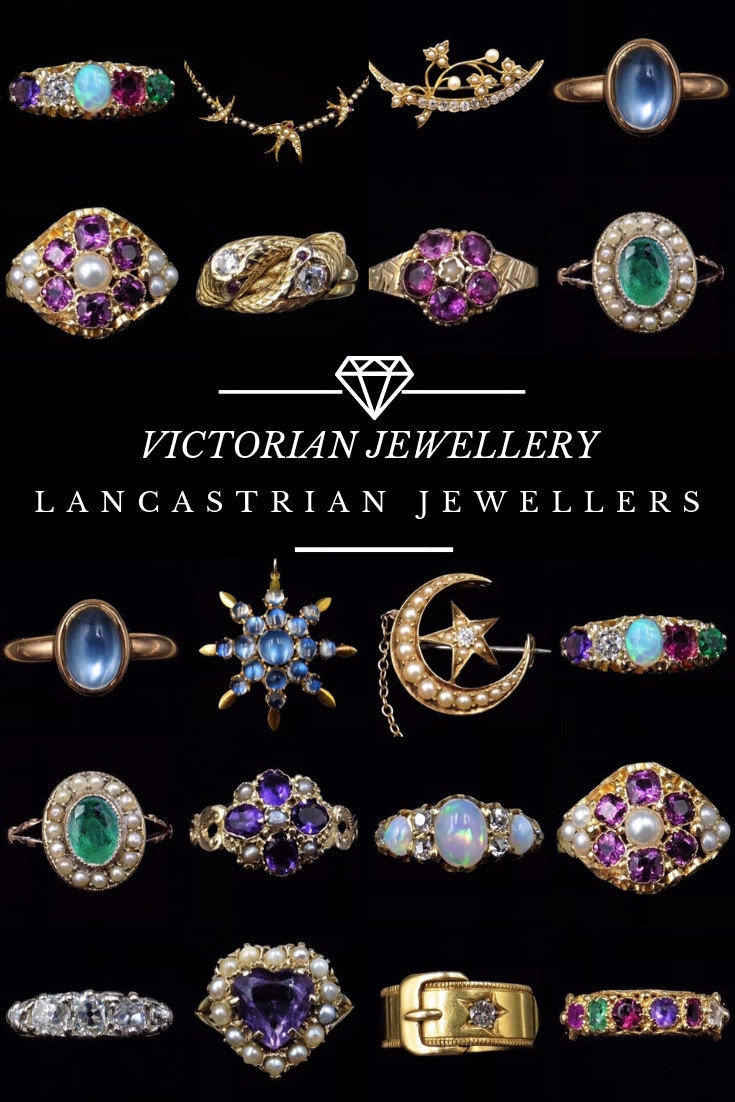