The Ultimate Guide to Georgian Jewellery 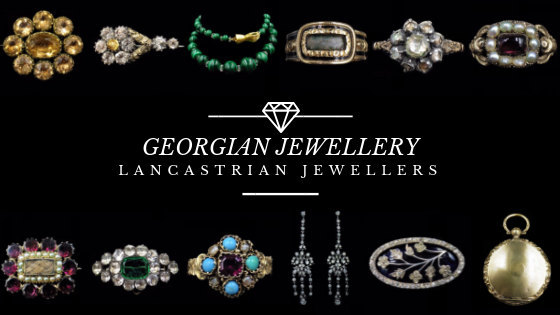 The term ‘Georgian’ refers to the English art and culture produced during this era. However, despite the name of the period referencing the English monarchy, historical events in France, Germany and Italy greatly influenced motifs and designs in jewellery during the period.

With the Georgian period spanning over 115 years, there were several style changes and movements during this time; these are the Baroque, Rococo and Neoclassical styles.

The early Georgian era celebrated the baroque style which featured intricate designs, symmetry and ‘open’ lacy aesthetics. Despite being delicate, these designs were still bold and large in contrast to the Rococo style that followed. Rococo jewellery was more elegant, light and asymmetrical, yet still had many motifs in common with baroque style such as bows, flowers, ribbons and leaves.

During both of these stylistic periods the historical site of Pompeii was being excavated (circa 1740) which resulted in a surge of classical Roman imagery such as laurels, grape vines, leaves and keys with an emphasis on geometric and simple designs. This style is now often referred to as ‘Neo-classical Georgian’.

Another factor that contributed to this neo-classical style was the fact that Napoleon had been at war with Egypt. This resulted in the influence of Egyptian motifs such as pyramids and papyrus leaves on Georgian jewellery.

Throughout all three of the design styles during the Georgian era, there was very much a shortage in the availability of precious metals and gemstones. At the time, the world was beset with conflict which meant there was a lack of raw materials. Jewellery was often melted down to pay for wars and production of any new pieces was very slow. Sadly, as a result this is why very little early Georgian pieces exist today.

Silver was the most popular metal for jewellery in the Georgian period. Yellow Gold of 18ct or higher also became popular throughout the later part of the era.

Diamonds were the preferred choice of Gemstone for most of the period, however, women of the middle and upper classes would have both daytime and evening jewels. Daytime jewellery would consist of coloured gemstones such as Rubies, Emeralds, Sapphires, Chrysoberyl and Topaz along with Paste. Then in the evening, when only candles provided the light, Diamonds and clear Paste were used for rings, rivieres, earrings and brooches.

Foiling Gemstones, Diamonds and Paste stones was also very popular during the era. Foiling is a technique which consists of a painted metal coating under the gemstone to enhance the stones brilliance or colour. 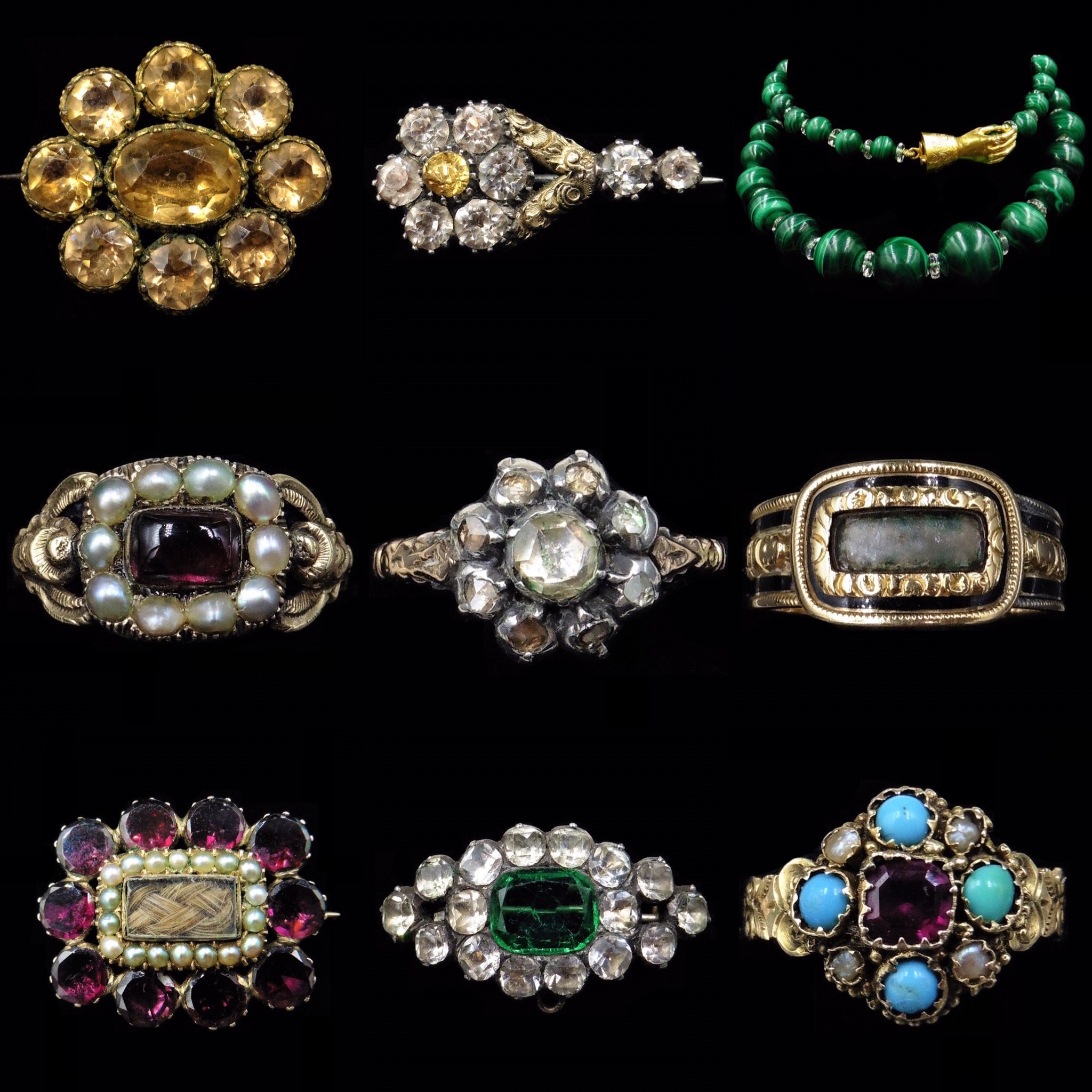 Georgian jewellery, whether Baroque, Rococo or Neo-Classical was characterised by exuberance and extravagance, much like the social lifestyle trends that were developing at the time.

There were a few pieces of jewellery which were very popular during the era and have gone on to remain popular today.

Riviere's - Riviere necklaces feature a strand of Gemstones or Paste stones in individual mountings linked together. They were usually short in length to be worn high up the neck.

Grinadole -  Grinadole earrings have a curving ornate shape, reminiscent of the candelabras of the Georgian era, featuring 3 or more dangling pear shaped ornaments.

Pendeloque - Pendeloque earrings feature a rounded top attached to a bow motif from which dangles a drop design.

Lovers Eye – Lover's eye lockets and rings were exchanged between couples, each one with a small depiction of one of the pairs’ eye hand painted into the locket or ring.

Mourning – Mourning jewellery was used to memorialise the death of a loved one. Often containing human hair, black or white enamel work and inscriptions.

Memento Mori - “Remember that you must die.” Translated from Latin, memento mori jewellery was designed to remind wearers of their mortality, with designs that incorporate symbols of death like skulls and crossbones, coffins and snakes.

Acrostic - Rings were the most common type of acrostic jewellery; they would have a line of gemstones, the first letter of each gem spelling out a word, most commonly a name or sentiment.

At the end of the Georgian period, jewellery did not suddenly dramatically change due to the coronation of Queen Victoria. Georgian elements and styles continued to be used and evolved creating a fluidity rather than an abrupt change.

Mourning jewellery, cameos, portrait miniatures, acrostic jewellery, and much more continued to remain constant with stylistic changes throughout both periods.

Hallmarking and Gold assaying wasn’t enforced until the 1900’s which makes accurately dating Georgian jewellery extremely difficult. However, there are some signs which will help you distinguish a genuine antique piece from a reproduction. 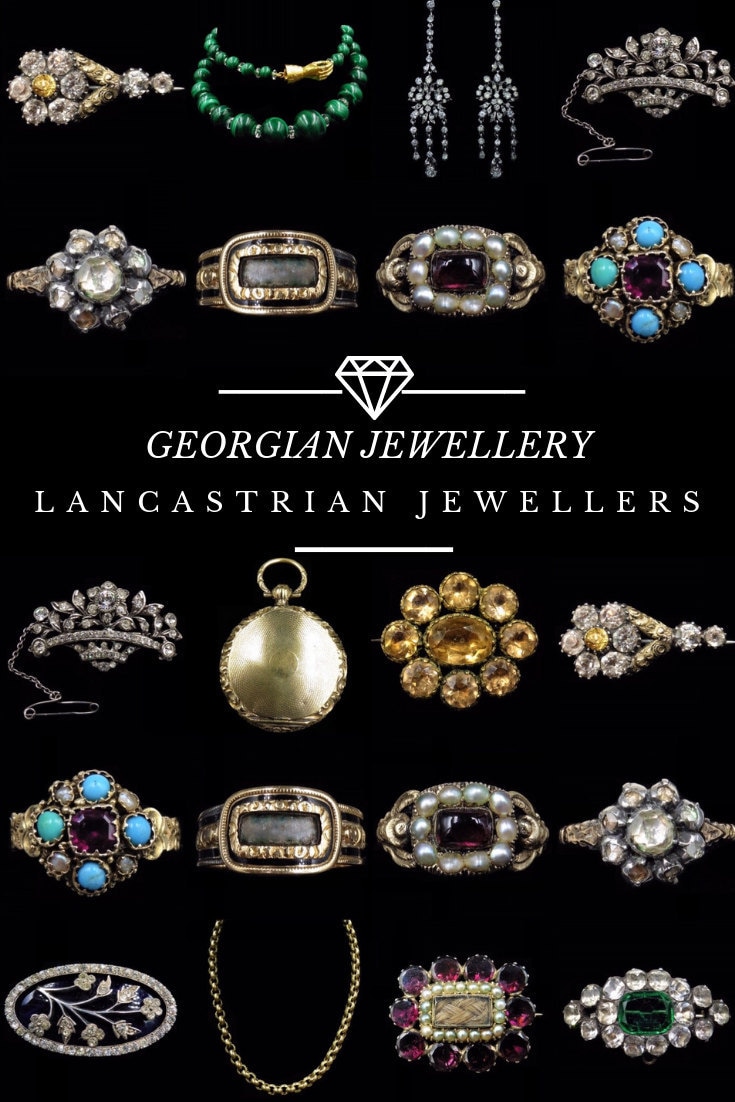