The Ultimate Guide to Edwardian Jewellery 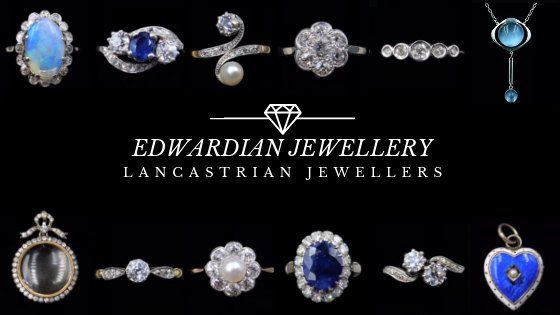 The Edwardian Era, like the Georgian and Victorian eras before it, derives its name from the reign of the English monarch, Edward VII (1901-1910). King Edward VII was the eldest son of Queen Victoria and Prince Albert and his reign marked the final period in jewellery to be named after an English monarch.

King Edward was known for his carefree extravagant lifestyle and the style of jewellery named after him reflected his love of glamour, elegance and high class. Together with his beautiful Queen Alexandra, he ushered in a new age of opulence.

Although the Kings reign was short lived, lasting only nine years, the Edwardian style actually started developing towards the end of the Victorian era (1890) and ended with the outbreak of World War I (c.1915). This period was also known as La Belle Epoque, French for the ‘Beautiful era’, named after the elegant and extravagant lifestyle of the international high society of which fine jewellery became an integral part of the dress code. 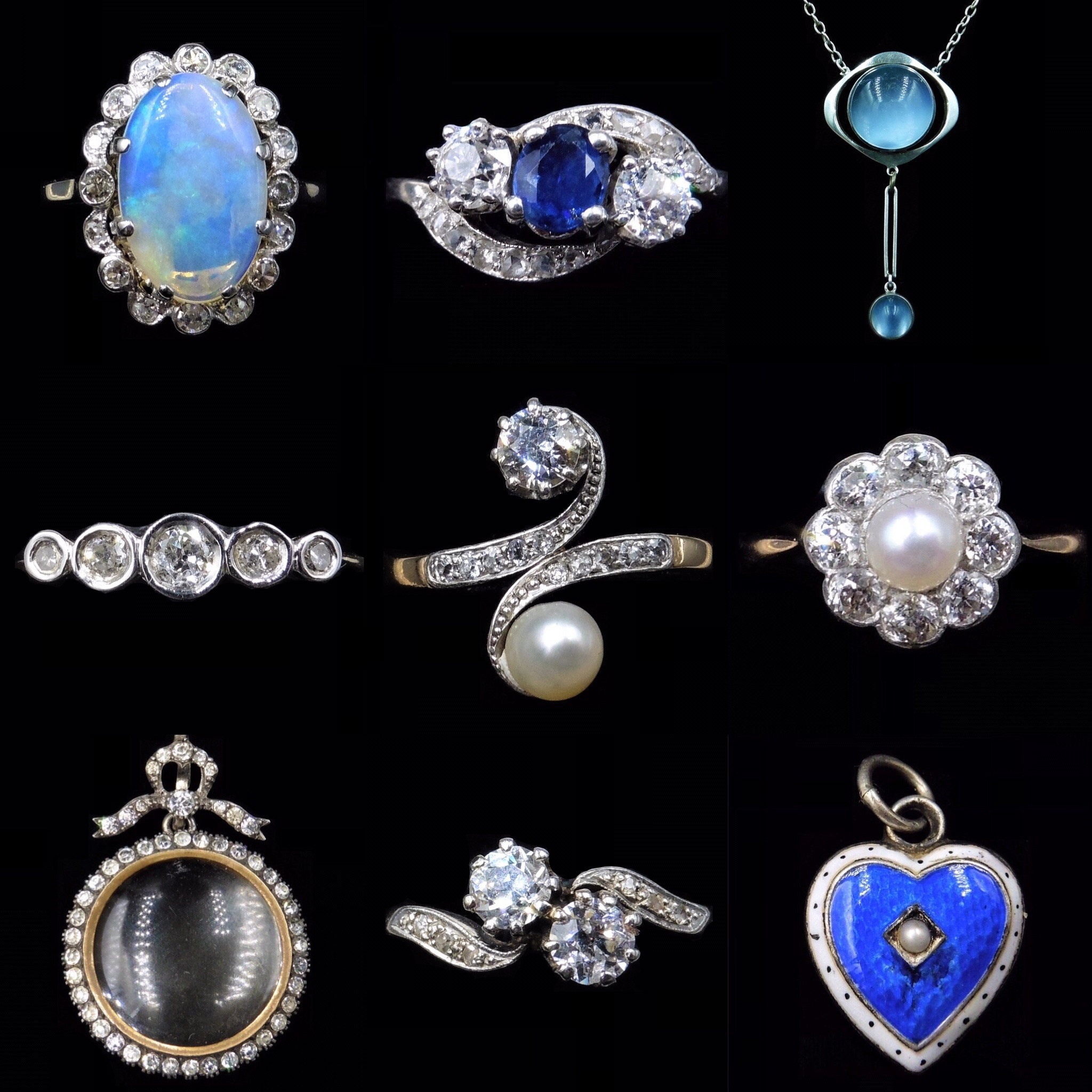 Edwardian Jewellery has always been known for its elegance and feminine design. The period coincided with both the Art Nouveau and Arts and Crafts movements but had its own distinct more traditional style.

The high society required jewellery to match their white silk and lace haute couture gowns which in-turn created a rejection of machine-made jewellery. This rejection started in the last decade of the Victorian era, and machine-made jewellery which was once seen as an innovation, was now highly undesirable by the upper class. This switch in manufacturing techniques meant that jewellery styles went from large and ostentatious to ethereal and delicate.

The hallmark of Edwardian jewellery was the beginning of the use of Platinum. In 1903 the invention of the oxyacetylene torch meant that jewellers could now reach the temperatures necessary to work with Platinum.

Platinum and white stones took centre stage, and although some colours were still worn, the spotlight was on Diamonds, Pearls and Platinum. Platinum was much stronger than Gold or Silver and therefore could be worked into delicate, lace-like filigree work which became the signature feature of Edwardian jewellery. This strength and rigidity also allowed jewellers to mount stones in more minimalist settings. Millegraining, a new decorative technique made possible by the use of platinum, is featured often on Edwardian jewellery. Its border of delicate balls and ridges surrounding a gemstone served to give jewellery a softer, lighter look.

Diamonds were the main star of the show which encouraged the development of new cutting techniques. The marquise, emerald and baguette cuts were new exciting cuts which became very popular. The Briolette cut was also often used in Diamond earrings and lavalier necklaces.

In 1902, Joseph Asscher introduced the Asscher cut for Diamonds. It was an attractive octagonal shape with 74 step facets around the crown. Asscher cut diamonds became extremely popular in Edwardian lacey filigree engagement rings.

The desire for more delicate jewellery, along with the new technical advancements in Platinum and Diamond cutting, meant for very feminine and stylish designs. Jewellers, such as Cartier, took inspiration from 17th and 18th century Parisian architecture and The Palace of Versailles.

Sautoir, négligeé and Garland style necklaces became very popular during the era. The Sautoir style refereed to a long necklace which could be worn in several strands around the neck, usually with a tassel or pendant. The négligeé pendant necklace, consisted of two pendant drops of unequal length attached to a stone or to draping piece of fine chain. The garland necklace, which Cartier is credited to have first designed, referred to Neo-Classical and Rococo-esque designs with delicate floral, foliate and lace patterns.

The eras favourite motifs were garlands and ribbons, bows, flowers, laurel wreaths, swags, and lace, all rendered with a new lightness thanks to the advances made in Platinum fabrication. Bows particularly were more abundant than ever, designed to simulate the fluid fabrics and lace of the haute couture gowns worn by the high society.

Guilloché enamel work in pastel colours also became very popular, with inspiration taken from Fabergé, who were pioneering enamel work at the time.

Although white stones, primarily Diamonds, were the main focus of the era; coloured gemstones were still used and very popular. Amethyst and Peridot were favourites of King Edward and Queen Alexandra, often paired with Pearls or Diamonds. Blue Sapphires, Aquamarines, Alexandrite and Rubies were often also used in the centre of rings, brooches, pendants and necklaces and then surrounded by Diamonds or Pearls.

End of an era

All three-aesthetics continued until the outbreak of World War 1, four years after the death of Edward VII. Formal occasions and high society parties disappeared and the light-hearted Edwardian spirit came to an abrupt end. Life changed dramatically in a heartbeat and jewellery all but vanished. Precious metals and gemstones became scarce and Platinum disappeared almost before it gained a foothold as a fine jewellery material. 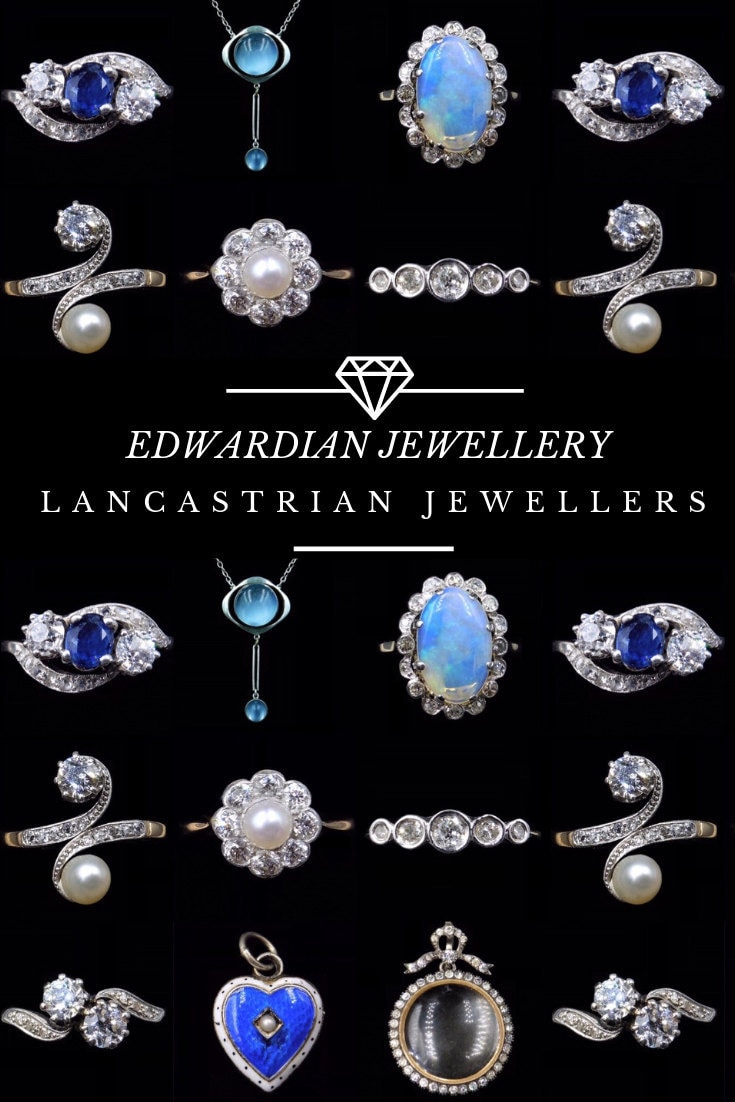